Nalda Searles Drifting In My Own Land was managed by ART ON THE MOVE and funded by Visions of Australia . It toured nationally to 18 venues between July 2009 and Febraury 2013. 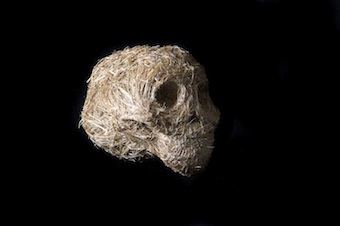 the grass skull, a hollow form in an effort to understand the casing
in which we live. grass stitched with linen thread. it is strong and resilient.

a siphon or funnel stitched from grass and salvaged woollen blanket.
Its talking about the movement of energy, fire, life  moving from point to point a direction.

the balga blanket . i started this in 1995 and it was much sttiching. the xanthorrheoa bracts each have
7 stitches, this became a meditation. its about shelter , protection , camoflage of ones inner parts which are sensitive, its about how the land offers us comfort and a home.
the blanket was gifted to me, very used and double. 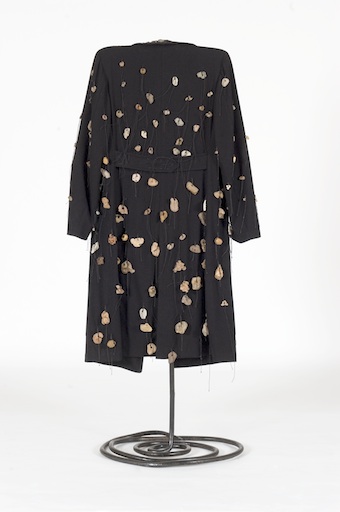 the stone coat, dorothy’s wildflowers , they are like small stoney flowers,
poems hanging from the surface.
the stones gathered and donated.  over years .
it should be named the collectors coat. each stone has a natural hole in it. the original owner of this coat was deeply affected when he saw it. 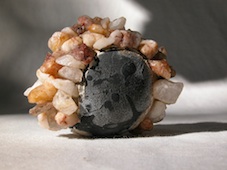 tjunti . stones and a tennis ball  made when I was a camping in central australia
i like it because it has become an inexplicable object.

the kangaroo couple in john curtin gallery . perth.
dresses, xanthorrheoa, silk, and rye grass.
they have a presence which is uncanny.
the installation team said that they could feel strange things at night in the room here.

singnage in Tamworth Gallery, i tried to salvage it
but unfortunately it had gone to the tip .I was quite hurt.

there is grass , silk and snake bones , its like a dried out dam in a paddock,
when I was 8 I almost drowned in a dam like this, they could have been my bones there,
its a spiral before the plough cuts its diagonal furrows across the land, simple coiling with a strong thread and the lifeline of red silk. 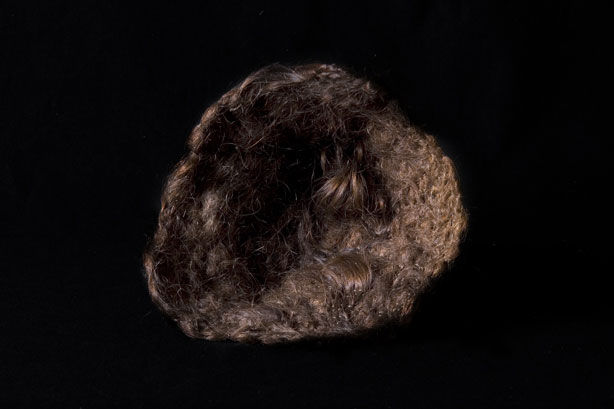 hair basket is made from my own hair stitched with strong cotton.
its a vessel ,  and feels like soft leather  ,
the hair took about 20 years to save.
i was offered a bag of hair by a hairdresser but i couldnt handle it.
this piece drew much attention in the galleries.
Its a human thing to react to human hair away from the head. 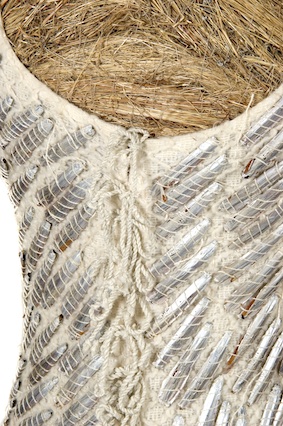 this is the reverse of the white kangaroo. the silk strings running down the back of the dress
came from a small silk shirt I found.
the whole shirt supplied enough textile for all the ties.
xanthorrheoa bracts are stitched onto a white dress
the kanga shoulders are made from rye grass.

this is the brown kanga dress when  i first put the bracts onto it in 1995.
todd is wearing it at elach butting rocks near muckinbuden.
my mother made the original brown woollen dress for me in 1976.
I dont see this dress as an artwork.. it is more a fact of life . it is more than art or is it art and life combined.?

sweet desire,  a mans suit trousers circa 1947  (purchased in Kalgoorlie) with netting circa 1960 (purchased in Timbucktu) , its about a mans need to expereience the softness of the feminine. verticordia grandis flowers are stitched onto the netting. 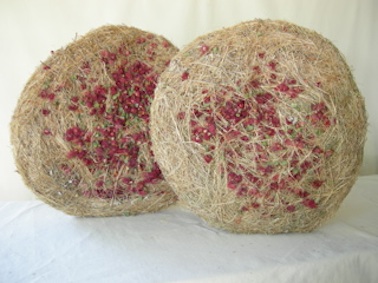 courting cushions made for my parents
who did not have the opportunity to court much.
they were married not long before my father went off to war.
it is rye grass stitched with thread
and mixed with verticordia grandis. flowers from the sand plain country. 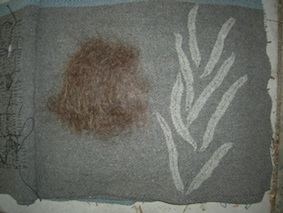 this is a book of stories made from an old grey blanket. there are 32 pages in it and each one tells a story. here it is hair and banksia leaves on the first page.every other page is covered with xanthorrheoa bracts like music scripts.. it think it could be composed as music.

Botanica has been sleeping and dreaming, she has emerged from a watery hole, there is flotsam and jetson floating around her,

she is from the bush but could be anywhere even in the bathtub or a bed.

this red blanket has a cotton mattress cover stitched on its other side. the marks are from a solar resist i accidentally did over 3 years. its xanthorrheoa bracts there are 7 vines of them snaking up the blanket. the seven sisters , its an old blanket , a red comforter.

grrrrr. is a small figure with a big presence,
it is fearful looking and menacing, with its hackles up but it really is protecting itself and looking for a place of shelter.
the body and the head were found years apart
and then the hackles were applied some time later again. 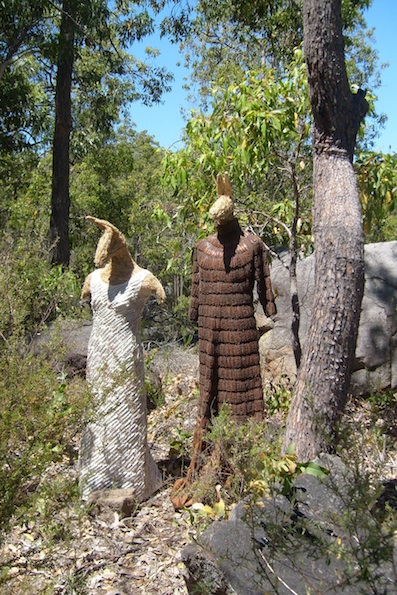 Here are the kanga couple looking so dignified.
alert and not fearful . they are like and egyptian couple commanding our attention.

a hybrid stole for a wayward woman.
eucalyptus  leaves tied with silk threads cover a fur which is reversed
its a homage to female anmials. and intended to offer some comfort  to enjoy from the mallee trees.
Posted by nalda searles at 11:28 PM No comments:
Labels: drifitng exhibition., stories., textiles
Newer PostsOlder PostsHome