99% of commercial retail design falls off at the ankle yet one of the most important areas of design is the foot especially in turned or cabriole legs.  It takes several goes at finding the exact pattern and balance –

Below:  The leg on the right has had a trim up lightening the lines through the base area. 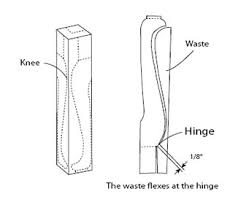 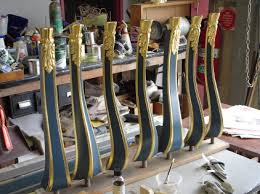 Master Chippendale had the foresight to get into the furniture pattern book game in its early stages. He carefully noted the popular styles of the day, and published a book called The Gentleman and Cabinet-Maker’s Director in 1754 at the rather expensive price of £2.8s. It was supported by wealthy subscribers, and meant to appeal, as the title says, to both gentlemen and cabinet-makers, “as being to assist the one in the Choice, and the other in the Execution of the Designs; which are so contrived, that if no one Drawing should singly answer the Gentleman’s Taste, there will yet be found a Variety of Hints, sufficient to construct a new one.” (Preface).